Darryl Woods was born in Nashville, Tennessee in 1959. He started studying dance at the Florence School of Ballet in Florence, Alabama. He continued his studies at Ballet Alabama under the guidance of Dame Sonia Arova. After that he moved to New York City, where he initially joined Arthur Mitchell’s Dance Theatre of Harlem, followed by Alvin Ailey and finally Steps@74th. He appeared in The Nutcracker and performed in Porgy and Bess, a production by the Metropolitan Opera House.

Darryl made his European touring debut with Sophisticated Ladies by Duke Ellington. Once in Europe, he met Sidi Larbi Cherkaoui during the rehearsals for Alain Platel’s creation Iets op Bach. Cherkaoui asked him to join the cast of Foi, Myth and Babel(words). He was also Cherkaoui’s assistant for the production of Tempus Fugit.

At KVS Woods worked on The Life and Works of Leopold II and appeared in various TV and film productions. 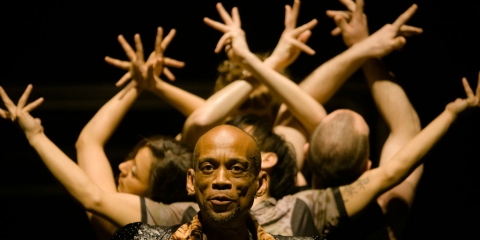